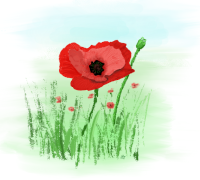 Most closely associated with the laying of wreaths at the cenotaph on armistice day, this march was long attributed to Beethoven, although never officially numbered. It is now widely accepted as having been written by the little known German conductor Johann Heinrich Walch, once choral master for the Duke of Saxe-Gotha-Altenburg, and also thought to be the composer of what is now the British Regimental March.

Grandiose, sombre, but in places uplifting, this march leaves a lasting impression. Its association with national mourning and rememberance means it is seldom performed except on armistice day. This transcription leaves the military band parts largely unmodified except to share out some of the off-beat duties in the inner parts.

If you enjoyed this piece, have comments or corrections, we'd love to hear from you.

This music is licensed under the Creative Commons Attribution Licence.