Giovanni Gabrieli was the nephew of the established Venetian composer Andrea Gabrieli, and studied composition both with his uncle and with the Flemish composer Lasso. As organist at St. Mark's basilica in Venice, he composed a large number of works taking advantage of the space and acoustics, mostly for small groups of mixed instruments and/or voices in the "cori spezzati" (seperated choirs) style developed in Venice during the 16th century.

The collection "Canzoni et Sonate" was published in 1615, three years after Gabrieli's death, and features many later works for groups ranging from a single ensemble of six players up to works for 22 players in five ensembles. Canzon XV is in the middle of that range, scored for ten instruments with optional organ. In common with many of Gabrieli's works parts are not ascribed to any specific instrument as he had to use whatever players he could. Most commonly this would be brass and violins, but since the parts are relatively equal any combination of similar instruments works well. 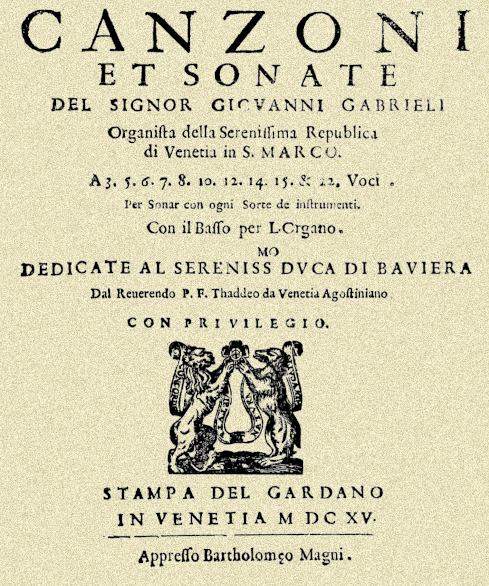 We first played a sax choir arrangement of Canzon XV back in 1997, but that arrangement is now somewhat hard to find. Here we present our own transcription of Gabrieli's original parts based on a digital copy of the 1615 edition from the Augsburg State and City Library, provided by Harald Fischer Verlag in the collection "Die Musikdrucke der Staats- und Stadtbibliothek Augsburg 1488–1630" (https://www.fischer-download.de).

As a first foray into deciphering mensural notation and since the originals lack dynamics, articulation marks, and in some cases even accidentals, there are likely several mistakes! Please let us know so we can fix them.

If you enjoyed this piece, have comments or corrections, we'd love to hear from you.

This music is licensed under the Creative Commons Attribution Licence.